The movie trailer has been released for Marvel’s Black Panther, a movie focused on an African comic book character of the same name, and it has caused quite the stir. That Africans exist in the Marvel comics universe is hardly surprising, but the movie is centered on events in the mythical locale of Wakanda, a nation on the west coast of Lake Victoria in East Africa (Source), which stands out because it is the most technologically advanced nation on Marvel’s Earth (Source). This is worthy of note considering that there are no actual First World developed nations on the continent of Africa (Source) and that the average IQ of Sub-Saharan (black) Africans is only ~70 (Source). On this latter point, Wakanda particularly stands out since its technology has apparently been developed in isolation from the world, “from agriculture to early days of knife and spear-building to developing exotic materials” (Source). This means that the isolated Wakandans are the most technologically advanced human beings ever, and they achieved it on their own.

This is precisely how Wakanda is depicted in Marvel’s new film—a futuristic cityscape with advanced aircraft soaring through the skies; African spears alongside advanced energy weapons, lip plates alongside advanced body armor. This depiction of Afrofuturism prompted one black activist to declare on twitter, “Wakanda is what Africa would’ve been like if white peoples had minded their own ******* business” (Source). This same sentiment was shared by another, “Wakanda is so beautiful, this is what Africa had the potential to be if the white man didn’t **** us up” (Source). And another, “Wakanda could’ve really been us if white people hadn’t… if anti-blackness hadn’t… if everyone left Africa alone” (Source). Indeed, the self-contained universe of so-called “black twitter” has no shortage of people taking pride in Wakanda even though many freely admit that they are only now even attempting to learn about Black Panther comic books. The source material is only relevant to them insofar as it allows them to further embrace Pan-Wakandanism™, a manifestation of black power fantasies as condensed and viewed through the lens of a Jewish-created comic book. They need not understand anything about Africa, its peoples, or its cultures when they can just embrace Wakanda as a utopian ideal, what could, or rather would, have been.

Now, there are some obvious problems with this thinking. Firstly, the various kingdoms of Sub-Saharan Africa, which are often held up as evidence of their civilization and culture, only came into being during the Middle Ages, and their rise was facilitated by trade with Europeans and Arabs. Indeed, what history is known of those peoples is largely left to us by Muslim writers since the Africans themselves lacked written language and instead relied entirely upon oral traditions. Secondly, none of those kingdoms or “empires” were ever more than alliances of tribes, and they certainly never rose to the level of the Greeks, Romans, English, French, &c. For example, the “Songhai Empire” was the most powerful of the Sub-Saharan African kingdoms, and they were still relying on mud as a building material in the 15th century. Naturally, it is hard to fathom how blacks could have gone from the Stone Age to Space Age without help when, with help, they were still using mud huts and such while Europeans had long been erecting massive stone castles and cathedrals that still stand today.

But let us put such issues aside and come to the proposal at hand: namely, that the United States should establish an actual Wakanda for black people as a form of reparations and reconciliation. Imagine a new nation being carved out wherein the new Wakandans were provided with homes, investments allowed local entrepreneurs to open businesses to serve their people, and the new natives were free to establish whatever form of government they chose including their own justice system. Once this new nation was established, all western interference would be removed by law to ensure that the Wakandans were free to do as they wish with their newly sovereign nation. As part of this process, ownership of any and all natural resources would be restored to the Wakandan people. Through such efforts, the newly formed nation would have the means of sustaining itself economically while providing much needed jobs for its people, and so on. Naturally, this would not include providing advanced spaceships, energy weapons, or a futuristic cityscape, but whites providing such things would violate the spirit of Wakanda anyway. The entire point is to afford black people the chance to become what they were meant to be on their own terms, and the United States absolutely has the ability to offer just such an opportunity to settle any perceived debts owed to the descendants of slaves.

It is important to note here that past attempts at quantifying reparations have almost entirely been tainted by the personal biases of those making the estimates. For example, one form of estimate attempts to valuate “stolen labor” of slaves using modern minimum wage of $7.25 per hour with applied interest, which yields claims that blacks today are owed approximately $59 trillion (Source). Of course, this ignores that the average hourly wage for a laborer in 1860 was only $0.10 (Source), which would have been equal to approximately $2.71 in 2016 (Source), or nearly two-thirds less than the figure used for the biased estimate. Others instead claim that black people are still owed “40 acres and a mule,” or at least the value thereof, which is estimated to be at least $6.4 trillion (Source). This is inherently flawed since the “40 acres and a mule” is actually a myth. It is true that Union General William Tecumseh Sherman issued Special Field Order No. 15 to settle colored refugees on confiscated lands, but those lands were finite (400,000 acres), no mule was promised to anyone, and the order was overturned. Prior to that, the proposed settlement plan involved a finite number of 20- or 40-acre plots being auctioned to blacks at $1.25 per acre, or $33.90 in FY2016 dollars. While that is certainly inexpensive, this speaks to the fact that there was no plan to award every black person “40 acres and a mule” as reparations, so it is nonsensical to base any such attempt on that myth. What then should we do?

There have been many efforts by both whites and blacks to encourage resettlement to Africa—so-called “Back to Africa” movements—but most people today declare that this would be unfair since American blacks have never lived in Africa, know little to nothing about life there, and so on. As the thinking goes, it would be cruel to uproot them and drop them into an unknown land. In truth, this argument makes little sense when one considers how much of “black culture” in the United States is about seeking “African roots,” adopting African customs (or what they perceive as such), and so on. If American blacks long to have African names, clothing, tribal identity, and the like, would they not achieve all of that by returning to Africa to form their own nation according to their own desires? It rather seems that the truth is that liberals and blacks are both tacitly acknowledging that life is better in the West than in Africa, and they see it as cruel to force them to live without the convenience of white societies even as they rant about how evil white people are. For the sake of argument, however, let us assume that it would indeed be too cruel to send African Americans to Africa.

In that spirit, the modest proposal here presented is that a total of 59 counties covering an area from California to Texas be separated from their respective states and the United States to form Wakanda. The area covered is approximately the size of Spain with preexisting housing for around 33 million people with the possibility of easily accommodating the 43 million black people currently in the US. Any white people living within that region would have an opportunity to relocate, with assistance, to somewhere else within the United States. Likewise, black people living anywhere in the United States would be moved to Wakanda with “settlement” being on a first-come, first-served basis. In other words, if a black family could reach a now-vacant mansion in southern California before others, they could stake their claim to it. This would incentivize blacks from around the country to move to Wakanda as quickly as possible to acquire the best real estate, to form neighborhoods and communities around extended families, &c. 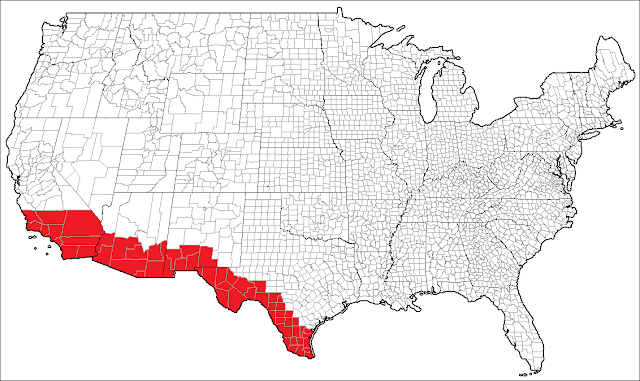 There would be some growing pains as white families and businesses were forced to leave Wakanda, but the United States would be better for it in the long-term. For example, cities such as Los Angeles, San Diego, and El Paso would be lost in the bargain, but people and industries could be relocated to now-homogeneous cities in need of restoration such as Detroit, Baltimore, and Atlanta. Others such as the film and television industry—centered on southern California—could be prevented from reestablishing themselves elsewhere in the United States unless they agree to abandon anti-white, pro-degeneracy policies and ideologies. Another benefit would be that any illegal aliens captured in the resettlement area could immediately be deported, and any attempting to flee north into homogeneous white areas would be easily noticed and deported as well. Additionally, since Wakanda would be a black nation that would replace the entire US border with Mexico, illegal immigration would become a nigh impossibility as Central and South Americans would not be able to blend in within Wakanda and would have no excuse for crossing the closed US-Wakandan border. Wakandans themselves would also have no incentive to allow illegal immigration into their new nation since that would involve non-blacks stealing work entirely from blacks.

As the black activists have said, the Afrofuturistic Wakanda of comics and film is what they could have achieved on their own. So why not provide them with that opportunity while returning the United States to homogeneity? This proposed Wakanda would have natural resources, port access to both the Pacific and Atlantic oceans, ample opportunity for international trade, and First World infrastructure unlike anything to be found in developing nations in Africa. Racial tensions would vanish overnight as whites and blacks went in their own directions peacefully, and both would be free to pursue their own interests without concern of being oppressed or the oppressor. If blacks truly believe in Wakanda, why not make it a reality?