Traditionalist Christians naturally see their faith as having been a unifying force in Europe, but heathens are rather fond of claiming the opposite: namely, Christianity was a subversive force that destroyed indigenous European cultures by encouraging incessant warfare on paganism. The implication here is that Europe would have been more peaceful and united under paganism than Christianity. Otherwise, there would be no reason to criticize Christianity as “subversive” or “violent.” After all, if paganism would prove to be just as divisive and prone to warfare, why complain about the same Europeans doing what they would have done anyway in the complete and total absence of Christianity and its influences?

Consider the example of Charlemagne and his efforts to subdue Saxony. The so-called Saxon Wars started in 772 and did not end until 804, but the event upon which modern heathens almost entirely focus occurred in October 782 in Verdun, Germany. After a pagan Saxon, Widukind, had provoked yet another in a series of rebellions against Frankish rule (before fleeing to Denmark), Charlemagne marched into Saxony with a demand that the rebellious faction be brought forward. The majority of the Saxons submitted to the king as they had before, and they offered up 4,500 men who were said to be the guilty parties. Those men were subsequently executed, and the Saxons would go on to be Christianized. Heathens see this as a grand crime. Ignored in their estimation are the times pagans burned churches, broke their oaths of loyalty, and so on.

Other events to which modern heathens like to point are the Inquisition and the Northern Crusades, both of which indeed targeted pagans. Again, the thinking is that Christians were willing to kill or convert infidels, and that meant that their very presence was divisive and resulted in unnecessary European deaths. The fact that pagan populations eventually all converted to Christianity is used as evidence of the faith’s wickedness and divisiveness rather than its ability to unite disparate tribes that otherwise had little in common.

As history shows us, however, there was no such thing as a “peaceful pagan” that was inclined to happily coexist with his neighbor. For example, consider the Roman invasion of Gaul, which saw pagans on both sides of wars that lasted several years. After the Romans had succeeded in their cause, they set about suppressing the Gauls’ Druid priests, constructing their own temples over Celtic sites, and turning “holy springs” into thermal spas (Source). The Romans had subdued their neighbors through conquest, and they had no qualms about destroying the native paganism in favor of their own. Similarly, worship of Roman gods was found in Germania (Source). It has been said that the Romans were “tolerant” of other religions, but that really was only true insofar as native beliefs did not conflict with the worship of the Roman gods (Source). In other words, worship of native gods might be allowed, but that was largely only the case if such practices did not preclude the conquered from observing the practices of the Roman cult.

The Romans were not unique in this either. Indeed, before the rise of the Latins, the Greeks took their religion and culture wherever they went so that “Hellenic” societies existed from Europe to Asia to North Africa. Later, following the collapse of the Western Roman Empire, the Germanic Saxons, Angles, and Jutes invaded Celtic Britain, and they brought with them their own pagan beliefs, which they would eventually abandon for Christianity. Subsequently, other Germanic peoples would invade and bring pagan beliefs back to then-Christian Britain. In each of these cases, preexisting beliefs may have been tolerated to a certain extent, but the conquering peoples’ religious beliefs virtually always came to replace those of the conquered.

Despite this dynamic, Europe was united, either politically or religiously, precisely zero times in the days of paganism. There simply never was an overarching concern that could unite peoples from the British Isles to Eastern Europe. For example, Alexander the Great (356-323 BC) built an empire that stretched from Greece to South Asia and into Northeast Africa, which was certainly impressive, but his empire did not span into the body of Europe. The Romans were able to subdue all of Southern Europe and most of Western Europe in addition to much of West Asia and North Africa, but they failed to subdue Northern and Eastern Europe. Extreme tribalism served to ensure that Europeans remained divided, but Catholicism provided something that could unite peoples of different tribes and nations without them giving up the rest of their identity. A French Catholic naturally had something in common with a Polish Catholic without erasing differences.

Consider the heathens’ collective focus on the Norse vikings. What exactly are the vikings famous for having done? Raiding, killing, and raping their way through other European populations. They and their culture are held up by heathens as something to be respected and even imitated today. But those same heathens then accuse Catholics of being vile and wicked for killing fellow Europeans. Why exactly is it fine for pagans to kill, rape, or sacrifice other Europeans yet Christians killing in a time of war, even in self-defense, is held up as proof that Christianity is a violent source of subversion and division aimed at destroying Europe? The answer should be obvious—hypocrisy. Modern heathens like to view their preferred historical figures through rose-colored glasses while they instead see devilry in everything the Church has ever done. Their preferred Europeans having raped and killed other Europeans is seen as fine because they were pagans.

This same hypocrisy is demonstrated by heathens who attack any and all Christians, even medievalists, based on the actions and beliefs of the most liberal Christians. This is hypocritical because they deny responsibility for the majority of heathens who are also exceedingly liberal. Indeed, there are heathen groups who promote multiculturalism, embrace homosexuality, &c. (as seen below), and they are by no means rare. The largest (and official) heathen organization in Iceland has openly taken stances against racism and in favor of gay marriages. Obviously, such liberals are not representative of far-right heathens, which should be acknowledged, but many heathens fail to extend the same courtesy to Christian traditionalists who are most certainly not liberal. Some go so far as to declare that traditionalists are just “bad Christians” because “true Christianity” is Marxism rather than what appears in the Bible or Church tradition, or that is at least the convenient viewpoint of heathens seeking to cast Christianity in the worst possible light at all times. 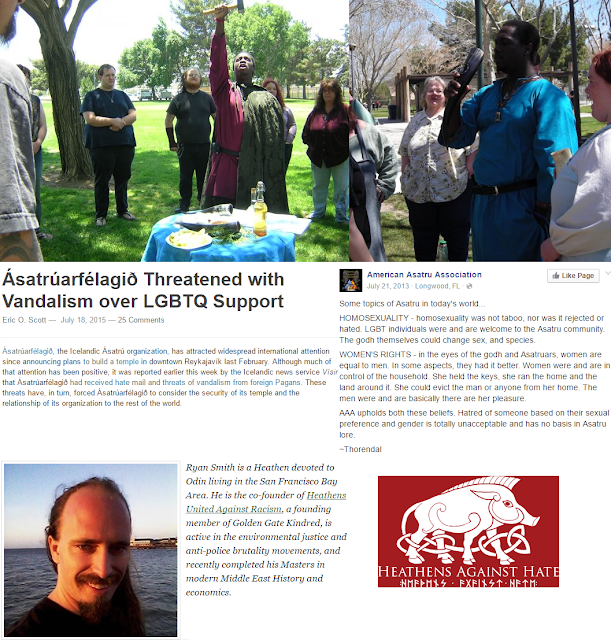 The truth is that there was no such thing as a “peaceful pagan” in the distant past, and heathenry today is not some sort of magical bastion of traditional values. Whether or not modern heathens truly believe their talking points is open to debate, but the fact remains that pagans, both past and present, are just as guilty of the supposed crimes of which they accuse Christians. If paganism is not held up as being “anti-white” because pagans of the past raped and killed other Europeans, then there is no reason to say that Christianity is “anti-white” because European Christians of the past waged war and conquered lands. If far-right heathens are not responsible for those of the far-left, then the same must be said of Christian traditionalists and their modernist counterparts. This is especially true because, while pagans lack a religious text that condemns feminism, homosexuality, cross-dressing, &c., traditionalist Christians can point directly to both the Bible and tradition to support their beliefs, and quote mining is not needed as is often the case with “liberal Christians.”